OS/2 stands for Operating System/2. IBM and Microsoft developed MS OS/2 in 1987, the first version of this 16-bit multi-tasking system that was intended to replace and Windows 3.x. Microsoft took part of the code to develop Windows NT 3.x. IBM continued with the development of OS/2 till 1997/2000 releasing versions 2 to 4, which are 32-bit systems. Version 3 and 4 were released under the name OS/2 Warp. 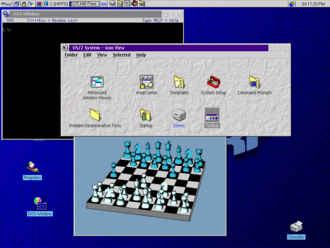 My experiences with OS/2 are limited to Warp 3 (1994), which is probably one of the ones I have ever had with any OS. It never crashed on me and that is more than I can say about every other OS that I have ever used other than DOS. OS/2 has the same feeling as Windows 3.11 or Linux 1.3 with a chunky taskbar floating on the screen. OS/2 Warp 3 came in two flavors — blue and red spines. The red spine version fully supported installing Windows 3.11 under it and the blue spine offering no support.

By 2000, the development of this project was picked up by Serenity Systems International under the name eComStation, which kept its GUI similar to the X Windows System.

On December 2005, IBM discontinued the development of OS/2. Many people think that the lack of interest to this OS is the result of weak North American promotion. OS/2 is more popular in Europe than in the US. Many of the sites that I have visited are in Russia and/or Germany.

On November 2015, Arca Noae (project Blue Lion) as a distribution based on OS/2 Warp 4 under license from IBM — not based on eComStation.

In April 2017, Blue Lion was released as ArcaOS 5.0 (OS/2 5.0). There is no clear explanation what is going to happen to license and production of eComStation with the licensing and release of ArcaOS 5.0. Perhaps OS/2 will become the next Linux, where multiple companies and/or organizations can release custom distribution as long as IBM signs of the proper license.

installing OS/2 Warp 3 is a simple. Just insert each one of the floppies and follow the instructions on the screen — fairly fool-proof.

I never had a chance to play around with Warp 3 was year 2000 complaint and this meant installing numerous patches. In the other hand, OS/2 Warp 4 (available on CD-ROM, no need for floppies) was Y2K-complaint and supports speech recognition. This version was marketed emphasizing on this issue and often used in telephony, especially voicemail servers.

In the case of eComStation (eCS) or ArcaOS 5.0, follow the instructions of the installation disk and booting with it. Unfortunately I have not been able to get my hands on either.