BeOS was a proprietary (not open) OS released in 1995 for the IA-32 (32-bit x86) and PowerPC architectures. BeOS is very similar to Unix although it is not a clone or related distribution. The biggest difference is Be File System (BFS) that behaves as a database using meta tags.

Around 2001, there was even a version of BeOS for Internet Appliances (BeIA) that used Opera 4.0 as its GUI and a variation of its file system referred to as CFS (Compressed File System). At the time, this was fairly innovative as similar web-devices ran mostly buggy Java applets or the highly inefficient Windows CE. Ironically BeOS family of systems eventually died off in favor of the inferior quality of the Windows family of systems.

Because some systems still run no-longer-supported BeOS, developers have continued its development under the name Haiku, which is covered next on this page. 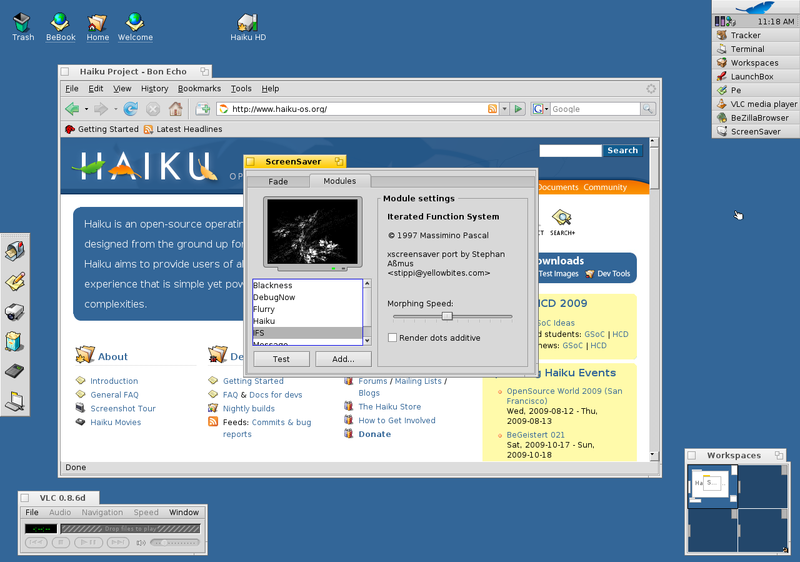 Haiku is partially POSIX-complaint and even includes the Bash-like shell without learning curve. As with most systems, Haiku is as good as its application library. Haiku serves as a means to extend the life of old BeOS applications as well as new ones specifically designed for Haiku.

I have only been able to install Haiku on a VDI, not as a sole OS on a HDD or partition using its .ISO image. Unfortunately, as of mid-2022, the VDI freezes when using VirtualBox running on Linux to the point that I have been forced to reboot my laptop as all applications fail to respond. As such, the image or the OS itself is nonoperational. I hope the error is in the image or configuring the VDI as I really like the Haiku project.

Like most operating systems nowadays, the installation is handled by a live disk. The process is straight forward. It loads all necessary drivers including the 802.11 adapter and there is barely any configuration needed.

Although Haiku recommends running its nightly builds, I have found them buggy especially when running the default web browser known as WebPositive, which depending on the version has not let me log in to my Google account.