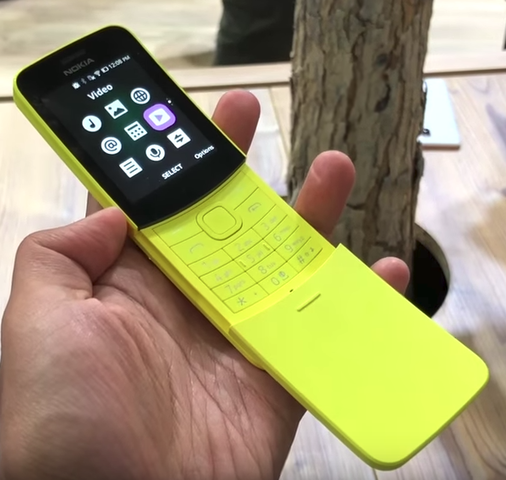 KaiOS, founded in 2016, is an Android-based operating system developed by American company KaiOS Technologies (offices in Hong Kong, Taiwan, China, India, Brazil and France) for feature phones (not smart phones, but rather semi-smart dumb phones) forked from the defunct Firefox OS (2013-16). Firefox OS was planned to compete against Android (not necessarily iOS) on smart phones and other smart devices including television sets. Unfortunately Firefox OS was not well received by developers leading to its demise.

KaiOS took the Firefox OS (forked as Boot to Gecko OS or B2G OS, defunct as of 2017) code and modified it for feature phones — usually with a 1.1 GHz Qualcomm Snapdragon microprocessor, small internal storage (2.37 GB of about 4 GB used by the built-in apps), 512 MB of RAM, a slot for external storage (microSD) up to 32 GB, Bluetooth access, no keyboard, no touchscreen (usually the most expensive component in a smart phone), clam-shell (flip phone) with a 320x240 LCD screen (QVGA, 262,144 colors) and usually a low quality (2 MP) camera.

Note that Firefox OS and now KaiOS boot directly to Gecko (Firefox). Therefore apps for KaiOS are coded in HTML5, CCS3 and JavaScript using Mozilla's WebIDE. This allows them to run on inexpensive hardware (that would not break easily and hence fairly affordable) capable of running on 2G and 4G at a fraction of the cost thanks to lower bandwidth and battery consumption (about 390 minutes of talk time and 300 hours of stand-by).

Although third-party are apps (usually not part of the OS) are browser-based, some of apps can run offline (no feeds or hosted apps). The only difference is that theKaiOS single image advertisement (KaiAds) that runs at the start of these apps fails to run (not cached). By the way, the web browser app is simply labeled as Browser (extremely original).

There are several companies that are working with and/or have invested over $50 million in KaiOS (as of May 2019) including Google with an investment of $22 million, which has also supplied compatible versions of Google Search, Google Assistant (speech recognition rather than using a keypad) and Google Maps. It is interesting that Google is helping the competition or trying to secure a position in the feature phone market — a different subset of the mobile market.

KaiOS has become a hit in developing countries especially in Asia and Africa bringing internet access to over 100 million current (as of May 2019) and potential customers who cannot afford a smart phone. Having an app store or repository (KaiStore) offering Facebook's WhatsApp (communication service of choice in most of Asia and Africa) has helped too.

In India, Jio has invested $7 million and uses KaiOS for their mobile phones — branded as JioPhone (about $25 with a keypad only or $45 with a QWERTY keyboard) with its own version of the app store (Jio Store). Needless to say, hackers have found a way to install and run the KaiStore on any JioPhone.

In North America, the selection of KaiOS mobile phones is extremely limited. Some feature phones running KaiOS, although not advertised as such, are targeted to the elderly and start at about $20 ($10 if refurbished as of September 2020). The best feature phones running KaiOS in the North American market is the Nokia 8110 4G (nicknamed the banana phone) with a retail price of $70 with a keypad only.

KaiOS currently holds a large (if not the largest) piece of the feature phone market share and can possibly become the leader in this technology in developing countries.

I could not convince KaiOS to give a free unit from any vendor to test the OS so I had to buy an Alcatel A405DL running KaiOS 2.5 for $20 (no service, 802.11 only) to test this OS. By the way, to no one's surprise the customer support staff had no idea what KaiOS is. Maybe KaiOS Technologies should advertise their OS in the US. Maybe this way users can ask for KaiOS when buying feature phones instead of simply buying cheap mobile phones with some proprietary OS that no one has ever heard of before. Hence they could provide KaiOS on more units in the US as an alternative to iOS and Android in order to secure American investors.

The storage structure is similar to that of Android — when a mobile device is mounted.

Note that KaiOS does not save files to microSD and the OS does not seem to give any means to change the default path. It seems that access to microSD is for users to save and/or move pictures, videos, music and other personal files between the internal and external storage rather than writing to it.

The unit comes with built-in apps.

One thing that I have noticed so far is that the version of KaiStore does not offer the same apps advertised in other countries like Google Assistant or other Google apps or services for the feature phone that I bought. According to KaiOS the selection of apps depends on the sole decision and selection of the vendor and/or carrier — in my case, Alcatel A405DL. This selection is fairly poor compared to the selection from vendors abroad, for example, JioPhone (India).

Audio is recorded in either at 8 KHz or 44 KHz (CD quality) sample rate .RCD. The naming convention is basically the timestamp with format yyyy-mm-dd_HHmmss (for example, record_20190904_172958.rcd).

Videos are recorded in 320x240 .GPP and saved with the same naming convention as pictures starting with the suffix VID_ instead of IMG_ — in other words, just as annoying.

Other than my complaint about pictures (not screenshots), I can even read my email on Browser. I could not get the E-Mail app to work with Gmail maybe because of the account security.

Some email services like Protonmail do not display properly and are almost impossible to use. The page slowly refreshes every time I scrolled up or down.

Other online email providers like, Yahoo display properly although the latter sees device as Firefox OS and not KaiOS.

One little issue that drives me crazy accessing my email in Browser is to authenticating much too often. I understand having to log in to 802.11 every time I move from one network to another (home to work and vice versa).

Maybe I am too much of a nerd, but I really like KaiOS 2.5 and my $20 Alcatel A405DL. By the way, if anyone wants to know why I get so excited about this technology, I like old technology. It has a retro look and feel.

There are rumors going around concerning the future of KaiOS with Google's $22 million investment.

I hope the latter two rumors are fake. If KaiOS wants to continue making an impact, it should remain independent and not allow takeovers by any company, especially Google.

As with most mobile phones, there is no installation. There is no way for users to flash the ROM unless rooting it. As with other mobile devices, updates are pushed via firmware flashing.

Turning VintageOS into an HTML5 app:

As per the documentation to make apps for KaiOS, any website can become an app. I am currently making the proper changes to VintageOS. If this works, the next project will be a game.