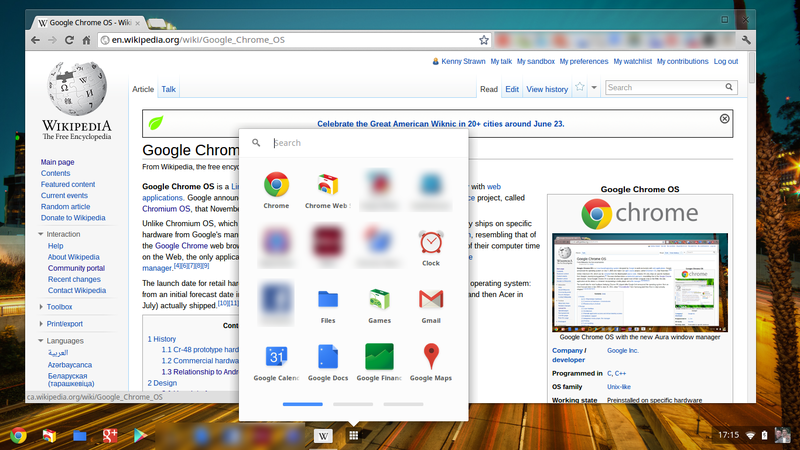 Google Chrome, developed and controlled by Google, may refer to either the web browser or the OS that uses the latter web browser as its GUI. Chrome OS is intended for laptops (not intended for desktops), which Google markets under the name Chromebook. Just like Google's portable OS, Android, it is also based on Linux.

Although the OS is open source, users only have access to personal files and no access to system files, especially the kernel. Chrome OS mostly runs web applications making it basically a thin client — except for multimedia with several (if not all) codecs, camera and daemons.

Running Chrome OS (stable channel only) demands the user to completely trust Google as it controls all aspects of the OS including and perhaps not limited to updates, which is perfect for users. As a matter of fact, all applications are only accessible through the Chrome Web Store and there is little to no risk of viruses or other malware.

As of version 53 released on September 2016, Google Chrome can run a Google Play, which allows users install and run Android apps.

Chrome OS has a limited shell in user mode by the name of crosh.

The latter was taken from help_advanced.

There is no OS installation. Google does not offer any medium to install the OS and all updates are pushed only by Google. In other words, Google has taken an open source distribution of Linux (currently based on Gentoo, including the Portage repository) and closed it in the name of security.

Nonetheless in case of extreme errors, there is a local utility that resets the system to factory specifications (specs) from an on-board ROM chip called POWERWASH. Another alternative only when suggested by the Chromebook manufacturer is to restore the OS creating a recovery USB flash drive and booting from it. In the latter scenario, you need to contact the manufacturer for specific instructions.

If you are really interested in installing Chrome OS, you could check out third-party operating systems forked from Chrome OS (clones) like NayuOS, which is designed to only work on Chromebooks.